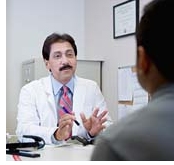 A vasectomy is a simple and highly effective surgical procedure that is performed with the purpose of making a man sterile. In other words, it takes away a man's ability to conceive children. While exact numbers are hard to come by, it has been estimated that some 50 million men worldwide have undergone this operation. Here we will look at some of the most commonly asked questions regarding vasectomies.

What Does A Vasectomy Do?

Vasectomies are intended to make one simple change to the male reproductive system - to stop sperm from moving from the testes to the penis. This is done by severing the two tubes through which sperm travels, otherwise known as the vas deferens. While the testes will still continue to produce sperm, the path they usually travel is no longer available. Since they have nowhere to go they simply die and are absorbed back into the body.

How Is The Procedure Performed?

A vasectomy is considered an outpatient procedure, meaning that the person is allowed to return home on the same day that the surgery is performed. It is commonly done in doctor's offices, clinics and hospitals.

You will begin by taking your clothes off and lying on an examination table. Sterile drapes will be placed over you to help prevent infection. You will be given local anesthetic injections in your scrotum or lower groin to prevent pain.

Once the anesthetic takes effect, two small incisions will be made with a scalpel or pointed clamp in the skin of the scrotum. Each of the vas deferens is lifted through the incision and severed (a small section may be removed). The cut ends are tied, clipped closed or cauterized together with heat. The incisions in the scrotum are then closed with one or more stitches.

Are There Possible Risks And Complications?

Even though a vasectomy is considered a minor procedure, problems can always occur. Things such as internal bleeding in the scrotum or infection will usually manifest symptoms within the first few days following surgery. Signs of increased pain or excessive swelling may indicate internal bleeding. If you have a fever, chills or notice drainage from the incision site then infection may have occurred. If you experience any of these symptoms or have other concerns you should immediately contact your doctor.

How Does It Affect Sexual Functioning?

Becoming sterile does not affect your ability to have erections or experience orgasms. These remain the same as before the procedure. Since the prostate and seminal vesicles continue to secrete the same amount of fluid, the ejaculate does not look or feel any different. Ejaculation occurs just as before except the resulting semen does not contain any sperm. The testes also continue to produce sperm and hormones so characteristics like body hair, voice pitch and sexual drive also remain unaffected.

Will Sterilization Cause Health Problems?

While it has been rumored that a vasectomy can cause all manner of health problems including heart disease and prostate cancer, there is no conclusive evidence that this is true. If you have any concerns your physician should be able to provide you with more information. Note: vasectomies do not protect you from sexually transmitted infections (STIs).

Since some sperm still remains in the upper part of the reproductive system after a vasectomy, it takes several weeks and numerous ejaculations before the semen is completely free of sperm. It is therefore essential to continue some form of birth control until after your doctor tells you that your sperm count is zero. To be certain no sperm are left in your semen, a postoperative semen exam will be performed usually about 3 months after surgery. This entails bringing a sample of semen from home into the lab. When these samples show no evidence of sperm, you are considered sterile.

How Long Before I Can Have Sex?

For about a week following the operation, the scrotum may appear bruised and swollen and you may feel slight pain in the area. You may also notice a small bloody discharge from the incision site. While this is perfectly normal it is certainly not conducive to love-making. Your doctor will tell you when you have recovered enough to resume sexual intercourse.

In the meantime there are some things you can do to help aid in recovery. Try to stay off your feet as much as possible for the first few days to lessen swelling. You can also use ice to reduce any swelling. Avoid any heavy lifting or physical exercise for at least 5 days following surgery.

Is A Vasectomy Permanent?

While vasectomy reversal surgery does exist, a vasectomy should generally be considered a permanent procedure. There are no guaranties that it can be reversed later and the reversal surgery becomes less likely to be successful as the years go by. For this reason, it is vital that you have all the facts and understand all the implications associated with this operation. Are you certain that you will never want to conceive any more children, under all circumstances? It is an important decision that both you and your partner should make because it may be final.

The content on Penis-Resources.com is for informational purposes only and is not a substitute for professional medical or health advice, examination, diagnosis, or treatment. Your use of this website and its services indicates your agreement to our terms of use.